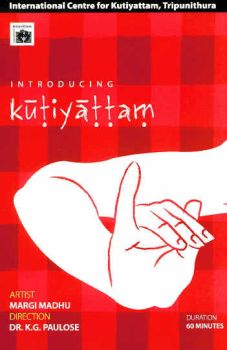 Using a `vidushaka,' as an anchor, who proudly claims to be the person responsible for the survival of this art in modern times, the film begins with a short history of Koodiyattom.

It tells us, through Rahul Eshwar's affected narration, the 2,500-year-old history of Sanskrit theatre. This theatre that flourished in North India made its emergence in South India sometime in the 6th century and soon followed the pattern as prescribed in the Natyasastra.

It was the works of Kulasekhara in the 11the century that provided a break from this tradition. Consequently, Sanskrit theatre in Kerala slowly moved to the temple premises. Koodiyattom remained a temple art, performed by one particular community, for the last 700 years.

Satire was the soul of Koodiyattam and it was usual for artistes to poke fun at even the mighty. However, as it was restricted within the temple walls, this criticism never reached the common folk.

This is an interesting observation that goes a long way to explain why Koodiyattom struggled to find a rightful place in modern times.

It was only in the second half of the 20th century that Koodiyattom was performed on public stages, became popular worldwide and with the UNESCO recognition in 2001, Koodiyattom was on the path of revival.

The film then pans to the other aspects of this art form through well-defined sections. In the one titled `Sanskrit dramas used in Koodiyattam,' there are stills of scenes from the major plays of Bhasa, Kalidasa, Sriharsha and the four Kerala plays.

All these plays give the actors ample scope to display their histrionic skill.

A list of the important characters leads to the performance proper. Here, the producers have defined a performance into three sections like `Preliminaries,' `Recapitulation' and `Presentation of the Dramatic Text.' But here the director could have offered some more explanation for some of the very ritualistic preliminaries like `goshti.' Even the initiated may not understand what all these signify.

The best part is certainly the one where the techniques of acting are explained. All the 24 mudras used are demonstrated, a demonstration of `Kailasodharanam,' and `Sikhini Salabam' emphasise the importance of `netra abhinaya' or use of eyes to express emotions. The Angika and Vachika aspects have been effectively presented.

The film winds up touching on Aharya (make-up), a brief demonstration of Pakarnnattam, the role of women, the use of mizhavu and other musical instruments.

Theatre, according to Kalidasa, is a divine visual sacrifice. And the film ends, like a Koodiyattam performance, by the artiste putting out the fire, like at the end of a Yajna.

Camera by K.G. Jayan, editing by V.S. Biju, audiography by Abhishek Bhattathiri, the post-production by Visual Communication team and C-DIT are near perfect. This DVD can surely stand independently as a crisp introduction to a wonderful art.