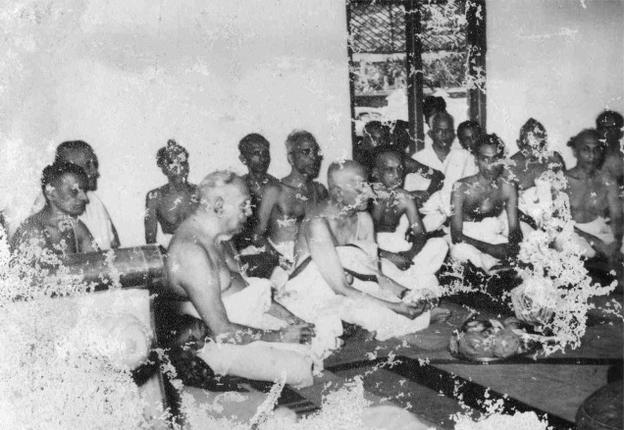 There were a few scholars appointed by the Maharaja who used to impart lessons to deserving students in Tripunithura. These students went through a gurukula system of education where the State took care of their boarding and lodging.

Old timers remember the row of ten rooms (pathu muri) close to the Sree Poornathrayeesa Temple where the scholars used to stay. Classes would be held in nearby palaces. The first move to establish a separate institution for Sanskrit studies took place during the 60th birthday celebrations of the then Maharajah Sree Rama Varma, (1895-1914) later known as Rajarshi, who abdicated the throne after nearly two decades of eventful rule. The Maharajah constituted a Sanskrit Encouragement Committee to come up with proposals regarding the setting up of an institution.

On January 14, 1914, the college was formally opened. A hostel providing free boarding and lodging to 24 students was also set up. Three reputed scholars, Brahmasri Manthitta Kunju Namboodiri, M. B. Sankaranarayanan Sastri and P. V. Panchapakesa Sastrigal, were appointed the first professors of Nyaya, Vyakarana and Vedanta respectively. In three years time the college and hostel that were housed in private buildings were moved to the present site where new buildings were constructed. Since then the college has functioned from this place, with periodic expansions and additions to the infrastructure.

“In the beginning admission to the college was restricted to only caste Hindus who had acquired some knowledge of Sanskrit. In 1932 the government ordered the bifurcation of the college into the Endowment section and the Government section. The former, exclusively for caste Hindus, was run with the help of the royal administration in a separate rented building.NyayaVyakaranaVedantaThe other section, open to all sections of society, was funded by the government,” Kavya Sastra JyothishaAyurveda informs K. P. Prasanna, the incumbent principal of the college.

Changes and additions in courses happened during the course of time. “Vedanta was shifted to the Brahmaswom Madhom, Thrissur, Jyothisha was discontinued, and Ayurveda delinked and a new college for this started in Tripunithura. First our college was affiliated to the University of Kerala, and when the Mahatma Gandhi University was launched we became part of it. We have been accredited by NAAC with a B Grade and we are an approved research centre,” adds Prasanna.

The college entered a take-off stage when K. G. Paulose was principal. He infused life and launched a series of events that have now turned into veritable landmarks in the 100-year history of the college. “If you ask me to pinpoint the lasting contributions of the college I would say it is the Sastra Sadas, the annual Parikshit Memorial Lecture and the revival of the publication section with the introduction of ‘Purnathrayi’, a bi-lingual journal,” says Paulose.

The Sastra Sadas, usually held in the palace, was for the first time held in the college in 1926. “Parikshit Thampuran was the chief judge. Since then we have been able to conduct this event without a break. It has provided a forum for intensive discussion of Sastraic topics by eminent scholars from South India. I think this is the only place where the sadas has been held uninterrupted since its inception,” Says Prasanna.

But Paulose sees a flip side to this event. “The Sastra Sadas is a very traditional or conventional method aimed at the preservation and encouragement of Sanskrit. It was fine till the late 1960s or the 70s. Interest soon dwindled as the new generation of students were drawn away from Sanskrit. The sadas, of course, continued. It is here the Parikshit Lecture become relevant. It was an effective way to provide the conventional a contemporary space. It was a way to integrate the traditional with modern knowledge and outlook. Indological studies were linked with art and culture. The lectures were printed and published. It became famous outside the State, so did the college,” says Paulose.

And, interestingly, all these three events have been funded by the endowments by three Maharajas and the interest accrued. “When I took over as principal I noticed that there were three unutilised endowment amounts that had grown in these many years. For instance, an endowment amount of Rs. One lakh created by Parikshit Thampuran, had become nearly Rs. 3.5 lakh. This was then earmarked for the Parikshit Lectures. Similarly, there were two other endowment amounts that have now being used for the Sastra Sadas and for the publication of books and the research journal,” says Paulose.

In 1926 a fire-proof building was constructed in the college to house rare palm-leaf manuscripts. The Indira Gandhi National Centre for Arts, New Delhi, has microfilmed these manuscripts. “Being the centenary year we will turn this into a heritage museum. We hope to open this in April,” says Prasanna.