Dr. K. G. Paulose’s Vyangyavyakhya: The Aesthetics of Dhvani in Theatre, an interpretation of the Chera king Kulasekhara’s concept of theatre, will rekindle interest in Kerala’s signal contribution

Rama Varma Kulasekhara’s Vyangyavyakhya (10 century AD) lay buried among dusty archival materials centuries after it was written. A few Sanskrit scholars attempted to study it, worked on it but failed to get it published. The epoch-making Dhananjayadhvani and Samvaranadhvani, collectively titled Vyangyavyakhya, comes out translated, with detailed interpretation, and other add on features. Vyangyavyakhya: The Aesthetics of Dhvani in Theatre by K. G. Paulose, former Vice Chancellor, Kerala Kalamandalam and Fellow, Indian Institute of Advanced Study, Shimla, will be released at the inaugural session of the forthcoming Kulasekhara Theatre Festival that gets underway at Tripunithura on February 24. 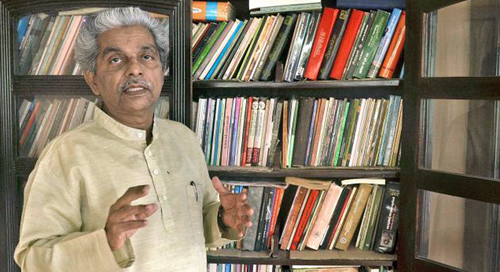 The Kulasekharas of the Chera dynasty ruled the state sometime between the 9th and 12 centuries AD from Mahodayapuram. Kulasekhara's contribution to theatre has not got the recognition it deserves. This book and the festival strive to achieve this.

The theory of suggestion or dhvani was propounded in Kashmir as early as the 9th century. This was considered as the most important development in aesthetics after the Natyasastra. The essence of this theory, that primarily focussed on poetry, was what is left unsaid is poetry. “Now, Kulasekhara applied this to theatre. His argument was that people came to watch plays not for the story, which they knew, but for something else. Every performance should be new. This could be achieved by applying the unsaid element. Kulasekhara is said to have called Natyasastra scholars and demonstrated this theory in full costume,” says Paulose.

Here Kulasekhara was introducing imaginative acting as opposed to imitative acting. “The actor goes beyond the plain meaning of the text. In fact, he gets liberated from the text itself. As the king enacted the plays scholars recorded it. This text is what we call Vyangyavyakhya or the interpretation of the suggested sense.”

This unpublished treatise on theatre is what Paulose worked on for nearly 20 years. “The palm-leaf manuscripts, which were in a private collection are available at the Oriental Manuscript Library of Kerala University, Thiruvananthapuram. Only one survives now. We took copies of it and worked on it.”

This treatise also introduced transformation of roles or pakarnattam, which has been so effectively used in theatre and other performing art forms today. “Kulasekhara made acting complex, sophisticated. When the actor transforms into many characters he creates a stage by itself. This is Kerala’s contribution to theatre, a value addition to the Natyasastra, which is recognised the world over. The three aspects that Kulasekhara introduced were then the freedom of the actor, imaginative acting and transformation of roles.”

These three aspects contemporarised our theatre. The role of the actor was redefined. He becomes a narrator and an interpreter. The silence aspect in plays made it imperative that there be hundreds of sub-texts. The responsibility of the actor was also to decode the inner meanings to the audience. “Here, Kulasekhara classifies audience into preksaka and nanaloka. The former are scholars who have mastered the 18 sastras and the latter the ordinary folk. Stating the obvious meaning (for the benefit of the nanaloka) the actor will then interact with the preksaka and convey the suggested sense of meaning through the movement of his eyes. He does not use words or even gestures to convey this. Kulasekhara’s theatre visualised the immense potential of suggestion.”

Despite all this Kulasekhara’s comprehensive guide that went on to create a pattern for the times to follow, did not travel beyond the boundaries of the State. Why? “This contribution is recognised through Kathakali and Koodiyattam though few realise that it was this man’s contribution. One reason for this is because no one has seen or read Vyangyavyakhya. There is a historical reason too. The Chera dynasty faced political uncertainties by the end of the 11th century and soon disintegrated. Though the actors kept it alive they were not concerned with the text but rather the acting traditions handed down to them. And another reason is that in Kerala manuscripts are recorded in Malayalam which is not read outside the state.”

Today, when discussions on Natyasastra or ancient Indian theatre are held, the names of Anandavardhana or Abhinavagupta usually crop up. But Kulasekhara is almost forgotten despite his lasting contributions.

“This festival and the book are an attempt at rekindling interest in this man and his great works. It is refocusing on the contributions of Mahodayapuram or Kerala. Also, I think it has a contemporary relevance. Contemporary theatre has strongly hinged itself on interpretative elements, aspects like the freedom of the actor, the importance of the director, all drawn from Kulasekhara’s theories.”